Being a parenting researcher means I know quite a lot about the theory of good parenting. I have had reason to read the content of a number of parenting programs and picked up ideas I especially like. Friends sometimes ask me for advice with their kids and I often discuss parenting issues with educators, social workers, and mental health professionals. I also enjoyed my placement in child psychiatry because so much could be achieved with some sound parenting advice. However, all too often, I forget to walk the talk myself.

The latest example was our trip to Sydney. We planned it to be a two day drive and the first leg took us from Melbourne to Camberra. We had planned some stops on the way and had a fair idea of the time each leg would take. We had water bottles, charged iPads, and fruit with us. The children played and sang and looked at the view and the trip went really well. We made two fun stops, the second one including a nice surprise with the host on the family estate guiding us around to see something as unlikely as beautifully renovated royal horse carriages from the 1800s in a shed!

Then we forgot all about planning. We spent a night and half a day in the capital city, which just happened to host the open day event for several of the embassies, and then set off to Sydney. No water bottles, or fruit, no planned stops, not even planning for meals and other necessities. I was really beating myself up because it was so stupid, so easy to prevent and still, there we were, killing the enjoyment of the trip with kids fighting in the back and parents ready to give up. By the time we arrived it was dark and dinner still had to be cooked. The only good thing was we weren’t dependent on me to orient in the dark…

There is something in the Positive Parenting Program called the Planned activities routine. It is NOT rocket science. But it works, especially in high-risk situations, such as long trips in the car. Such planning also works well with children who have a hard time adapting to changes and new situations or dislike transitions from one activity to another. Planning ahead and making these plans clear for the children, or indeed involving them in the planning, is something that minimises the risk for the whining and fighting that can occur when everyone is tired, hungry, stressed, overloaded, or all at the same time.

Luckily, when things were at their worst, we stopped at Wollongong, a town right by the sea, and had a long chill on the beach. Because although planning is very effective in decreasing stress and making life easier, what really counts is to be able to deal with difficulties constructively. When sitting in the car and keeping going was just not a viable option, we took a break. The younger ones sat in the sand and built a fortress with water around and our teenager photographed the waves coming in. No one said much, we all needed some peace and quiet, fresh air to breathe, the waves to listen to. But it was one of the nicest hours of our trip, a sunset by the sea, given to us unplanned, unforeseen, but deeply appreciated. 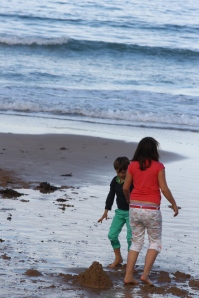 I guess there is no need to say that when we set out for a day in Sydney, the backpack was properly packed and distances, along with ferry timetables, duly checked. I even had nuts in the car so that the starving troops would have something to munch on until we got home in the evening. But we did take care not to pack the day too tight so there would be time for surprises. For you can only plan so much and you don’t want to have kids believe that everything can be planned and that all uncomfortable things can be avoided.

Nonetheless, take my advice and use some smart planning before your next long car trip. State your expectations, keep the kids busy and engaged, encourage the behaviours you would like to see and implement consequences for the ones you want to avoid. And be realistic! I will certainly remember to try and walk the talk myself next time around.