For the longest time I was the only one of the five cousins who took care of the procreation of the family. First one, the two, then three kids, and the others still showed no inclination to breed. On the contrary, my brother said it was the perfect contraceptive to take care of my kids – especially all three at once!

Finally, however, I found myself sitting between no less than two pregnant cousins at the latest family gathering in Budapest, and with a two-year-old looking at me with her father’s eyes from across the table. One of the cousins had just gone through the latest among prenatal diagnostic inventions: analysis of fetal chromosomes from maternal blood. No invasive diagnostics involved, just a simple blood test.

Although this method is still a novelty that only a few labs in the world do (and my cousin had to pay loads of money for it), it shows the speed and direction of where we are heading in terms of prenatal diagnostics. In the Netherlands, a new program of preconception diagnostics had been initiated – before couples even start considering a pregnancy they can find out about their risks for having babies with recessive genetic disorders.

The notion of risk, however, the risk of the fetus having some kind of anomaly, is very difficult for expectant couples to digest. Given this ultrasound marker you have a 1:200 risk of having a child with Downs syndrome. What?! What does that even mean? 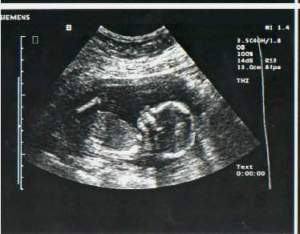 This baby is fine. Most of them are!

In our studies with expectant mothers and fathers we found that both parents were deeply shocked and frustrated by findings on the routine ultrasound that lead to risk estimations they did not expect or ask for. In addition, we found that after receiving a risk figure due to a marker found at the routine ultrasound, couples opted for invasive diagnostics 24 times more often than couples without such markers. The problem with invasive tests, such as amniocentesis, is of course the risk for pregnancy loss, but it also involves considerable costs.

Tomorrow my PhD student Annika Åhman is going to defend her thesis Pregnancy Ultrasound Detecting Soft Markers – the Challenge of Communicating Risk Figures. Apart from her being my student it is actually a very good thesis on an important subject.

Is having a healthy baby a risk or a chance? Why do we talk about a risk of 1 in 200, when there is a chance that 199 babies of 200 do not have a chromosome anomaly? How can we make sure that taking part in any kind of fetal diagnostics, such as the routine ultrasound visit, is based on an informed choice? As long as expectant parents think it’s a nice social event to have a peek at the baby and even get a picture of it, we will have to deal with parents being shocked by unexpected risk estimations.

My cousin, of course, clearly knew what she was doing when she requested the test – a leading researcher in her field of microtubules, she would know that cells sometimes misbehave and chromosomes get stuck where they shouldn’t. But her baby has just the right number of chromosomes and will be continuing the row of strong women in the family with her XXs in place. Chances are, she’ll be just fine. And the risks? Well, there is a risk of rain on her birthdays – she will live in England after all!